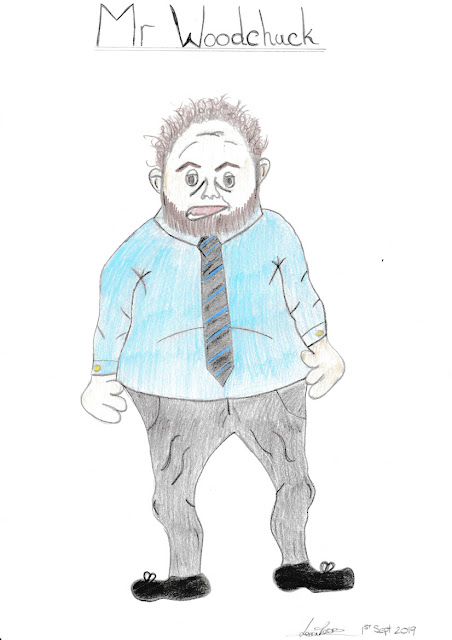 James swore on his mother’s grave, but then he swore on just about anything. That was his “get out of jail” strategy to dodge facing the consequence of seeing Mr Woodchuck after school. He was able to visualise Mr Woodchuck almost instantly which quickly led to a racing heart and sweaty palms.

Mr Woodchuck had a stern stare, causing the room to go cold. His forehead was crinkled from always frowning. In fact, James had never seen Mr Woodchuck smile. Maybe he didn’t even have a smile?

His round football shaped head was perfectly positioned on his shoulders, wearing the same oversized and largely plain blue shirt, giving the impression that he didn’t have a neck. He always wore the same black tie with mild blue strips with out of place gold cufflinks on each wrist. Mr Woodchuck was a stocky man. Short, maybe five foot four or five, with some extra weight around the middle. His hair was wiry, brown and curly complete with an overgrown beard which housed leftover ginger biscuits. He wore authentic Burberry, wool tailored black trousers which were just the right size. Coming in at around five hundred pounds, James knew Mr Woodchuck was making a statement. Any shorter however and he ran the risk of exposing his socks or belly rolling from under his shirt. His office spelt harshly of fresh mint. The smell often dominated the room so much it would make James eyes water like leaky taps dripping.

As James entered Mr Woodchuck’s office, the first thing to catch his attention was that of a single, shiny, sleek apple placed carefully next to a beaten up mouldy orange, before noticing Mr Woodchucks stern stare, causing the room to go cold…….

Lexi Rose
Welcome to the Creative File. My name is Lexi and I love nothing more than to get the chaos in my mind down on paper. Something constructive or something else and either works for me. .