It's been a little over a week since I posted my first Blog (on mum's site) and gosh, what a response I have had. I think that you are keen to know the next part of my story? well, here it is.

Oh and before I forget, I promised to find that photo of mum laying down and giving me the chicken the first time I met her. Do you remember? well, I've found it...... 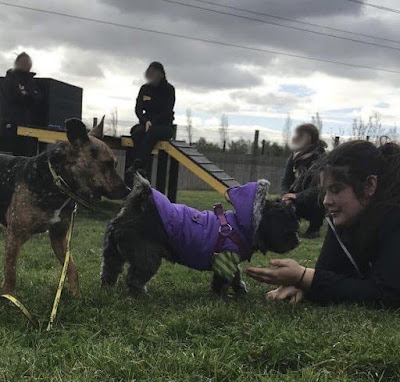 So, when mum found me, she spent a long time talking to the people who looked after me in Dogs Trust. They was excited for me to have sisters too so I wasn't on my own.

Dogs Trust thought that if I could live with other dogs too, I'd be able to build up my confidence and feel better about myself. I didn't want to always feel worried and anxious, but I just couldn't help it.

Dogs Trust helped set up an introduction. I was so frightened that I laid down on the floor and tried to be invisible. My handlers put on my lead and tried to reassure me, but I was very nervous.

Once outside, I ran around crazy, looking left, then right and running ahead. I loved to sniff the air and look for food in the bushes. I had forgotten all about where we were walking too, I was just happy to be outside. Being out on walks was defiantly my happy place.

Once outside the pen, I could see my mum and new sisters waiting by the gate. My sister were trying desperately to come and say hello. They ran as fast as they could and invited me to play. We started running around, chasing each other backwards and forwards really really fast. We ran around crazy for ages.

Cilla was black in colour, with short hair. She was a bit smaller then me, but I didn't mind. Lulu was white with some brown patches in her hair. She was smaller too, and much quieter then Cilla. Lulu and Cilla are sisters.

Mum didn't talk to me at first. She sat down on the grass and was watching. I was curious because most people try and come to me or talk to me and I get worried because I don't understand what they are saying. I was as brave as I could be and when she looked like she was busy watching the grass, or a bug or something, I'd creep up so quiet behind her to sniff. You know? check her out and stuff.

Mum never moved. Not the whole time I was sniffing and I felt great being able to walk away safely.

Mum laid down in the grass and was giving lulu and Cilla lots of attention. They was playing together, rolling around and having fun. Mum was also giving them delicious chicken. Gosh I wanted some so badly. My mouth was watering, I was dribbling and licking my lips and hoping I would get some too. I was trying to get closer and closer to join in, but I was very scared. Mum still hadn't looked at me and I knew I could trust that she wouldn't, I think. I took small steps to get closer.

Mum put a really big bit in her hand and held it out to me. She still didn't look. I had to make a choice, it was now or never and if I wanted the chicken, I needed to make the jump.
I stretched out my neck as far as I could reach, just to grab the tip of the chicken before running away again. Nothing happened after that. No one moved, or shouted or chased me. I was OK.

Mum held her hand out again and I was getting brave. She did this over and over again, feeding the three of us chicken until my belly was full. 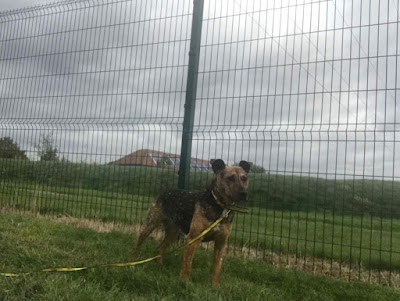 They came Saturdays, Sundays and during the week for a long time. We always played in the field and Mum always bought me a treat. I was always so worried that they would give up on me too and never come back. On the rainy days, we used to play inside in the hall. As they left, I would chase them  past the windows looking for them.Id run from window to window as fast as I could.  I'd watch them leave and feel really sad that I wasn't going with them.

I wasn't brave enough to go near my mum, but I liked the fact she didn't look at me and that she bought me treats. Lulu and Cilla were great fun though, we used to run around for ages, chasing balls and bouncing off of the sofa's. Mum used to bring in blankets too that she had slept with, or that lulu and Cilla had slept with. My bed used to smell of them all of the time.

Mum, Lulu and Cilla, visited me 22 times before I could go home with them, just to make sure I was as ready as I could be and then, that day came and for the first time, I was going home.

16th November 2017 was the day I came home. Dogs Trust bought me in a big yellow van. I had my blanket and bag packed, but I was very very scared. I didn't no how far away it was, or what the house would look like. Did I have my own room or did I need to share? where would I put my blanket? Maybe I had missed dinner time?, I did hope not though.

The good news, was I got to the house in a short amount of time and was really excited to jump around the house and find my feet whilst mum and my handlers did the boring stuff, but I am going to come on to this more in my next blog- My first days at home.

It is getting late now and way past my bed time. Mum says it's time to go to bed because it's a "school night" and mum needs to go to this place tomorrow called "work". I'm not sure what that is, but she is gone for a long time, so it must be fun, otherwise she'd be home with me right?

Email ThisBlogThis!Share to TwitterShare to FacebookShare to Pinterest
Labels: For Children, Speckles